PRAISE FOR THE BOOK 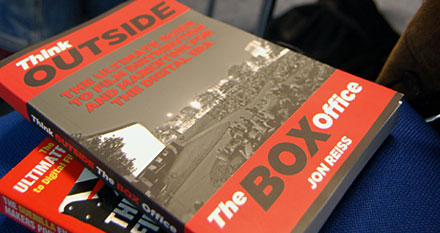 “Collaboration and dialogue are also the foundation for everything Jon has outlined in precise detail in this book. They should be every filmmaker’s mantra for (the) days (months and years) ahead.It is not a question of "just doing it"… Eat up every morsel Reiss provides. Internalize it and make it your second skin.” Ted Hope, Producer of over 60 independent films including, Adventureland, The Ice Storm, 21 Grams

“Let me save a few of you some time. If you are at all considering creating or producing an independent film, stop reading right now and just go ahead and buy this book… It's an invaluable resource for strategizing what to do with your film once you've made it. Jake Thomas, Blogcritics

“Reiss is a delicious combination of born teacher, compulsive anti-authoritarian and thorough scholar, whose nature is to measure, analyze and, most importantly, share his discoveries. . . . Think Outside the Box Office is absolutely required reading for everyone making any kind of media with hopes to meaningfully connect with an audience.” Adam Chapnick, Documentary Magazine

“Many people write about it. Fewer people have actually done it. If you are considering a DIY distribution route for your film, I recommend you read this book. Jon Reiss knows of what he speaks. This is not your father's independent film scene. Times have changed. Now, directors and producers need to know not just how to make a film but how to use the tools of the 21st century to find an audience. This book is essential reading for anyone making an independent film today." Scott MacaulayEditor, Filmmaker Magazine

“Think Outside The Box Office” cuts through the “wait and see” and “no one knows” currently so familiar in this uncharted terrain to provide in a no-nonsense, practical format an essential road map for anyone serious about getting their film made and — just as critically — seen. Christian Gaines, Withoutabox, a division of IMDb

Destined to become required reading for all filmmakers."Content Now

“Think Outside of the Box Office, a new book by author, filmmaker and all around new media thought leader Jon Reiss, is a recommended read for anyone looking to navigate the trails being blazed as the world of film marketing and distribution changes and evolves.” Chris Thilk, Movie Marketing Madness

“Reiss imparts his wisdom like a funny older brother or friend. I’m recommending this book to all of you, even if you’re only dreaming of a filmmaking career right now.” IndieFlix.com

“The new Bible for independent filmmakers. As the old world fades out, and the new world of filmmaker driven distribution evolves, Jon Reiss, lights the way. Easy to read, thoughtful and realistic, Think Outside The Box is a terrific primer for marketing your work. Truly a must read for anyone making films today.” M. Powell, Amazon customer review

" Jon has created a template for filmmakers to take their work out into the world with a plan for success!”-Roberta Munroe, Author - "How Not To Make A Short Film: Secrets From A Sundance Programmer"

"A must read. I wish I had Reiss' book 2 years ago. It shows us how to take our film destiny into our own hands." Gus Roxburgh, Producer, Crips and Bloods: Made In America

“The single most comprehensive and up-to-date resource for all things distribution. His own real world experiences, and interviews with other pioneers, offer an education both on the macro and micro levels of these new models.” Filmmaker Liam Finn

"Get this book! It's amust read by every truly indie filmmaker and producer. Marketing and distributing our work is now part of the game and Jon is on the cutting edge of it all. Hisbook willchange how you think about making and promoting your films and guide you intothe future with your eyes open." Buzz McLaughlin, exec. producer, Either/Or

“The most exciting part of the book for me is that John recognizes that this industry is in flux - and therefore the conversation doesn't end with the book. What works, what doesn't, what are new tools we can use to make sure we're laying the foundation for long careers and not financial ruin.” Jesse Shapiro, Amazon customer

“This book is literally the only thing I've found (and I've spent a lot of time looking) that has practical, realistic, and useful information about how to navigate the current distribution minefield…This is the book we've all been looking for and haven't found. Thanks for writing it. Someone had to do it." Sam Mestman, Producer How I Got Lost

“EVERY filmmaker should have this book in their library, period. In this day and age, you simply can't afford not to. You owe it to yourself and your film.” Tanya Wright, Filmmaker

“As a filmmaker, Jon has sweated all the details, sacrificed and fought to get his films seen and is sharing invaluable information so you won't have to make the same mistakes.” Jae Choe, Filmmaker

“Yes, indie filmmakers have all heard about hybrid and DIY distribution, but the information is scattered and our understanding of it is piecemeal at best. Jon's book is the single most comprehensive and up-to-date resource for all things distribution. This is the must-have book for all filmmakers working today.” Liam Finn, Filmmaker

“Blew my mind, inspired and immediately enlightening. The workshop radically reinvented of how I think about communicating story and message.” David Newsom, Los Angeles. Filmmaker/Producer

“Jon Reiss hits the nail on the head when it comes to the importance of marketing and distribution for independent film. In coining the term "Producer of Marketing and Distribution (PMD)" he identifies one of the key short comings and pitfalls of new filmmakers thinking on what it means to make a film. His fundamental point being...[that] production is only half the battle." John Donkin, London, Agent: Acquisitions

“Everything was interesting, involving and in plain English. Of all the film courses I’ve been at, this was by far the best. If you want to distribute a film this course is a must.” Larry Cowan, London, Filmmaker

The workshop is an excellent starting point for any filmmaker preparing to launch their project into the current complicated distribution landscape!” Mischa Webley, New York, Filmmaker 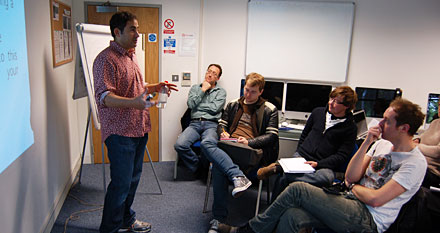 “I came to the workshop hoping to get information that would help me build a road map for marketing, distributing and releasing my indie documentary, and I got it. My brain is buzzing, my heart is thumping, and my to-do list has grown considerably. I feel tremendously empowered. From talking with Jon about my project, I realized how much I do have going for me/my film. It was great to have that affirmation- super empowering!” Marisa Miller Wolfson, New York, Filmmaker

“Thanks a bunch for a cracking weekend. It was great to be part of the workshops and hear genuinely useable, practical ideas and discover some invaluable resources. No filmmaker should miss the opportunity to learn the invaluable knowledge Jon has given us!” Tom Mulcrow, London, Filmmaker


“The workshop will give me tangible memory and supplementary info when going through the book, Think Outside the Box Office, during my upcoming distribution and marketing process. The information Jon provided frees me up to think more creatively about how to market and distribute it. So much great information- it was spilling out of my ears!” Adria Budd Johnson, Vancouver, Writer/Producer

“Thanks so much for doing this for us independent filmmakers. I thought the workshop was a massive amount of information that I had not heard of before. I think it was an invaluable source of information about distribution and marketing that not that many people are aware of, or can get to know about. I also thought the individual help that you gave to people about their projects was pure gold. There’s nothing out there like it.” Jules Rampton, London, Filmmaker

“I’ve read the book and came to the workshop wanting to supplement and build off that, and we did. After the workshop I’m much better equipped to transform my stand-alone film into a transmedia event!” Randy Astle, New York, Filmmaker

“Tons of information and just opening my mind about all the marketing possibilities. The workshop made me realize that there are a ton of potential ways we can make our film stand out in a flood market. I need to buy the book to retain it all.” Ryan Pears, Los Angeles, Filmmaker

“The workshop was full of useful information that every filmmaker should know and was presented in such a way that was both practical yet, inspirational. Through social media and other marketing tactics that Jon explained my film can have the presence I imagined for it!” Dena Ashbaugh, Vancouver, Filmmaker

“The workshop surpassed my expectations so much good info and I can’t wait to dive into the book! Jon clearly knows his stuff inside and out. I was blown away by the possibilities for creative transmedia for engaging with the core audience.” Stephen Aument, Vancouver, Filmmaker

“Jon is just a wealth of tremendous information. I now realize that being an independent filmmaker is about being a storyteller in across all platforms.” Jeff Gilbert, Los Angeles, Filmmaker

“Lots of good info [at the workshop] - some I hadn’t heard before (I’ve been to many workshops). I am motivated to move ahead with my distribution plan with examples of successful DIY/Hybrid campaigns.” Randi Cecchine, New York, Filmmaker & Teacher